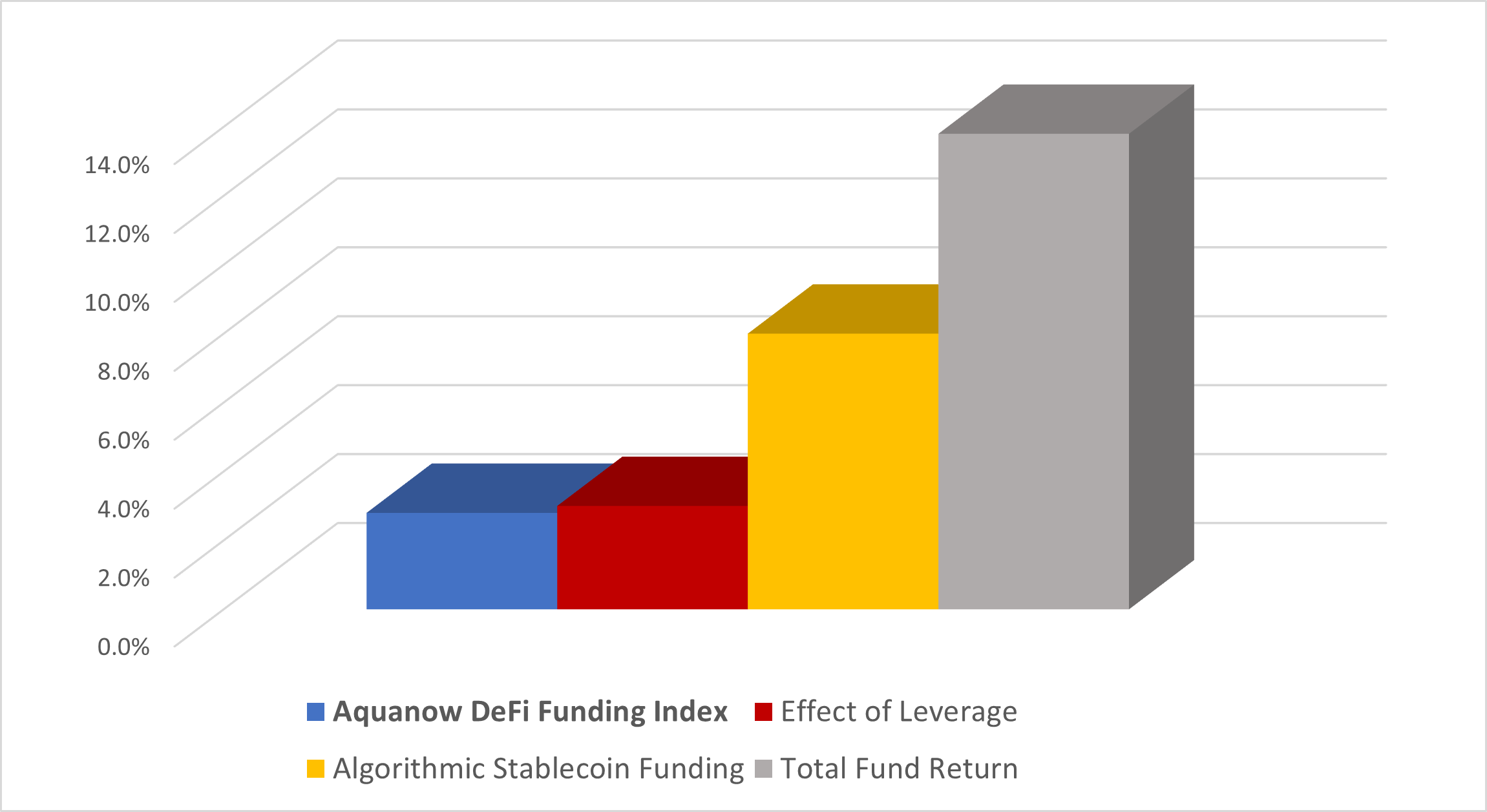 Whether it’s not growing on trees, being poured down the drain or rooting all evil, money is an indispensable part of our lives. More formally, currency is meant to serve as a medium of exchange, a store of value, and a unit of account. Thousands of years ago, our ancestors used cowrie shells or whales’ teeth to serve these purposes and for as long as there’s been money, there’s also been credit. Sumer is believed to be the first urban civilization, with about 89% of its population living in cities. Over 5,000 years ago, loans were extended there for agricultural purposes. Even when the powerful Catholic church banned usury, audacious bankers like the House of Medici used creative accounting of foreign exchange balances to extend credit.

Last week, we discussed how stablecoins are, in a way, the bedrock of decentralized finance. By providing the ease-of-transfer, immutability, and decentralization of blockchains, these sturdy assets can preserve value like the central bank-issued fiat which underpins the global economy. This combination of features has led to an explosion of growth and innovation since the early DeFi apps were developed:

Following humanity’s earlier experience, the rise of digital currencies has coincided with the development of money markets to match borrowers and lenders. Protocols like Aave and Compound have codified credit in a way that eliminates the discretionary influence of a loan application. If you post and maintain sufficient collateral, then you can draw balances from a pool of assets. As the pot gets imbalanced from excessive borrowing or lending, then the interest rate will rise and fall to incentivise calibrating capital flows.

Why would someone take out a DeFi loan?

Say a trader has amassed a large balance of Ethereum and would like to buy a house, but the recent market weakness gives them pause. A $100k down payment today would cost them 27 ETH, whereas a few months ago it was only about 17 ETH – a 60% difference. Just like a bank that helps its customers manage mismatched cash flow requirements, this trader could post 33 ETH as collateral and withdraw 100K USDC from Aave’s USDC pool as an advance. He/she could then off-ramp the funds using a regulated channel and satisfy the prepayment. The lender would receive a balance of aTokens representing their claim and this would increase continuously at the prevailing rate of interest. The borrower would be responsible for maintaining an 82.5% loan-to-value ratio of Loan/ETH with the former accruing interest with the passage of time. Partial or full payments could be made whenever and should the collateral value drop below the minimum threshold, the lender would have the right to purchase the security at a 5% discount. Digital asset markets move quickly though, so what about some sort of flash crash? Different protocols manage this in unique ways, but on Aave, holders of the governance token can stake their coins in the stability mechanism to earn rewards (6.5% p.a. today) while risking loss to compensate lenders in a shortfall situation.

In early 2009, the global economy lay in ruin following the collapse of Lehman Brothers and several other closed-door bank bailouts. In this speech, President Obama asked Congress to work together and enact massive stimulus, proclaiming: “You see, the flow of credit is the lifeblood of our economy.” While it’d be an exaggeration to make the same claim of digital markets today, there are savers and debtors. Increasingly the venues where they interact are both online and IRL. Aave’s ARC program is a permissioned liquidity pool that provides institutions access to decentralized markets while adhering to strict risk management and KYC/AML requirements. Compound Treasury provides a cash management solution for institutions which offers higher yields than traditional accounts. US dollar balances are converted to USDC and staked as liquidity for borrowers on Compound. Another example comes courtesy of 6s Capital and RWA Co., who closed a $7.8M real estate financing deal with Tesla to diversify the MakerDAO reserve vaults.

DeFi summer was less than two years ago, and the ensuing frenzy of innovation since has been motivated by institutional ambitions. To be clear $203B in total value locked across the major decentralized financial protocols pales in comparison with the traditional banking system, but as we saw with web2, software can scale incredibly quickly when fueled by network effects. As large-scale entities continue to experiment in these frontier markets, new tools will be required. This includes technological infrastructure (Aquanow’s bread and butter) and analytical instruments to help inform capital allocation decisions. While the nascent digital markets are inherently steeped in code and engineering, many financiers have been drawn in by the thought of applying unbridled innovation to the economic models they’ve followed for so long. When encountering new marketplaces, it’s only natural to rely on tools that proved handy elsewhere.

In traditional financial markets benchmarks provide a standard measure of an asset class’s risk and return against which similar securities are compared. The risk-free rate (RFR) is a foundational criterion for investment management, which the CFA Institute remarks “typically refers to a rate of return on an investment with assured (or nearly assured) payments.” Practitioners typically select the yield to maturity on government debt from a developed nation where the issuer borrows in their domestic currency and whose term matches the fixed income security being priced or duration of cash flows being discounted. For domestic institutions, this represents the opportunity cost of their capital and serves as the base layer against which to compare other assets. Let’s consider a simple example:

In the illustration above, we can explain the additional 2.2% of return on the TransCanada Pipeline bond (since renamed TC Energy) as compensation for the risks not borne by simply holding the sovereign debt of similar maturity. This “credit spread” is explained by the possibility of default (a government borrowing in its own currency can “print money” to settle their debts), lower liquidity (Treasury markets are among the most liquid in the world) and other issuer-specific considerations (for example ESG-related factors impacting demand). While there is some standardization, subjectivity does play an important part in such a spread evaluation. Difference in skill here can provide at least a temporary edge for return.

Is it possible to conduct such an analysis in DeFi?

The short answer is, “not really” but there have been some interesting notes on the topic recently. Lily Francus, a quant from Moody’s, takes a deep dive into the notion of a risk-free rate in crypto markets over three installments (with a fourth on the way). I personally like her work, but it’s quite technical, so not for all audiences. While Lily’s points about the basis trade and staking yields are super interesting, they’re tough to conceptualize in a more traditional context and have significant implementation challenges. This Finoa report provides another good overview if Lily’s four volumes aren’t enough. The authors have an easier style to read and make the important distinction that in traditional markets, interest rates are related to lending, while using staking yields and basis rates focuses more on isolating for default risk (except at the exchange level).

Coinbase published a blog post looking into the RFR in DeFi. Their approach uses stablecoin lending rates on the Compound protocol as an example. This aligns better with the concept of a debt instrument, but without a trusted central backstop the chance of default remains. Further, while the major lending protocols have undergone several security audits, exploit concerns are ever-present. Therefore, we cannot assert that these rates are risk-free. Having said that, overcollateralization, robust operating history, and other token backstops drastically reduce the probability of default or loss given default. I think another important feature is the emphasis on stablecoins. The Coinbase quants focus on USDT and USDC for their reliable pegs because together, they make up over 70% of the total market for stablecoins. While some crypto-natives denominate their savings in BTC or ETH, most people still tend to aggregate their net worth in a fiat-based currency. The two systems are overlapping at an increasing rate, but each scheme's idiosyncrasies require a distinct approach.

At Aquanow, we develop tools to help traditional financial firms interact with digital assets and we’re rolling out some related benchmarks. The first of which is the Aquanow DeFi Funding Index (ADFI) and Rate (ADFR). Our methodology also uses lending markets, but we’ve constructed an index that uses a weighted average interest rate across several protocols. In so doing, we believe this more accurately captures the opportunity cost of capital (or funding) in decentralized markets today. The Index measures the performance of capital invested into the digital pools in accordance with the weights selected and can serve as a benchmark against which to measure the performance of an active investment manager. You can read the whitepaper on our website, but here’s the TL/DR:

The Index and Rate are liquidity-pool-value-weighted composites designed to measure the performance and state of major decentralized lending protocols. By capturing an aggregate yield of stablecoin lending to selected DeFi pools, the standards can be used in performance attribution for investment funds, spread analysis and more.

Essential to our framework is that risk and return are inextricably linked. Over time, if an investment consistently outperforms its benchmark, then there are probably risk exposures that aren’t covered by the yardstick. Outsized upside is great, but investors are better off understanding the sources of those gains. As a participant in the crypto markets, I often hear about people who can generate “stable yield in the double-digits with minimal risk.” However, we can see that the largest, most liquid pools of capital are only returning ~3% today, so to achieve the higher rates of return, a manager would be taking greater risk. It’s possible that they’re using algorithmic stablecoins whose lending pools offer higher interest rates, but whose underlying assets have greater chance of de-pegging. Alternatively, the fund could be using leverage. Here’s a purely hypothetical illustration of how the ADFI could be used as part of an attribution analysis, where a fund’s total return in a given period can be decomposed like the bond example earlier. The ADFI is one of the return’s building blocks and with some skill or other benchmarks other sources of risk or gain can be extracted.

The important takeaway from the diagram above is that with the right tools, investors are better suited to get the right information. While it might be interesting to evaluate returns and rates in DeFi against traditional markets from a conversational or asset allocation perspective, these are apples-to-oranges comparisons, so purpose-built analytics are necessary. Because capital flows and rates are driven by forces unique to decentralized finance, so too do we need novel measurements and approaches to evaluate performance and risk.

Just as our currencies have evolved from shells and precious metals, the credit markets have transformed from benches in Venice to codified protocols. We should expect ongoing change and innovation as decentralized finance meshes with the incumbent system. It is wise to leverage the knowledge gained through past experiences, but eventually the tasks in a workflow shift so much that new tools are required. The Aquanow DeFi Funding Index (ADFI) will be the first of its kind published on the Bloomberg terminal. Official announcements will come soon - stay tuned for more details.