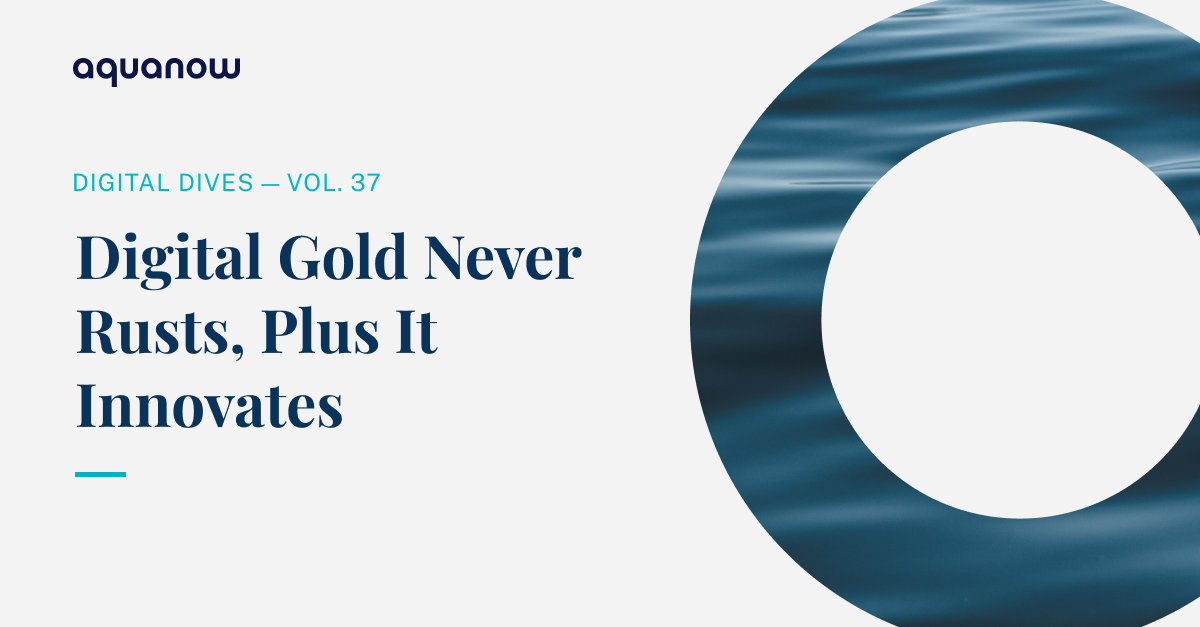 Digital Gold Never Rusts, Plus It Innovates — Vol. 37
< Back to News & Resources

Bitcoin has already seen considerable adoption by reputed institutional investors like Fidelity and Blackrock. As regulators continue to wrestle with how to provide token oversight, it seems unanimously understood that Bitcoin is not a security. The result is that the regulated asset managers who see promise in crypto provide access to BTC first. There’s far less legal or career risk associated with enabling the strongest and arguably most decentralized community. While I believe the current fundamentals favor Ethereum, my intent with the last note wasn’t to paint ETH as the only investment for professional asset allocators (diversification is paramount). Having said that, let’s dig into the institutional investment thesis for BTC.

No other project comes close to Bitcoin’s status as the leading brand in digital assets today. For many casual observers the project is synonymous with cryptocurrency. This helps BTC boast the highest value and deepest trading liquidity, so lenders happily accept the as collateral on centralized and decentralized venues. However, there are no Bitcoin-native DeFi applications currently, so sometimes posting BTC to back a loan, earn interest or collect yield requires an element of bridge/counterparty risk. This is particularly relevant for those in the community who question the security of any other chain or intermediary.

According to Messari, there are about 900K daily active BTC addresses, which compares to 580K on Ethereum. Further, the number of Bitcoin subscribers on Reddit outnumber ETH followers 3:1. Anecdotally, if you scan YouTube or Crypto Twitter it seems like the former’s community is louder. Digital asset values are underpinned by network effects, so a broader array of users tends to imply a higher value, which seems to be playing out in the market where BTC has a commanding lead in valuation.

The narrative around what drives Bitcoin’s value has evolved over the years. What started out as “A Peer-to-Peer Electronic Cash System” has evolved to be something more like digital gold. A non-sovereign asset with limited supply that can serve as a hedge against currency debasement (which is not the same as inflation, as many are learning). Gold has served as an effective hedge against extreme geopolitical events, like wars and unsound policy. Goldman’s Jeff Currie notes:

An interesting real-time example of this is how gold has performed with respect to the GBP and the USD. The U.S. Dollar is the predominant safe haven asset and we’ve seen its relative value soar this year. Meanwhile, in the U.K., global allocators face the same geopolitical tensions causing a bid in the USD, plus considerable uncertainty with respect to leadership, fiscal/monetary tensions, and continued questions about how the nation will prosper post-Brexit. This can be visualized in the relative performance of Gold:

Going back 10 years, an American would be down about 3% on his/her bullion holdings, while a gold investor in London would be up over 40%. A similar relationship holds with Bitcoin. However, going forward, ₿ has the added advantage of two important features. First, younger generations resonate with the decentralization of digital assets. Next, smart people are working on innovative ways to increase Bitcoin’s use cases, which makes it more interesting than the yellow metal.

In this presentation from 2018, Fundstrat’s Tom Lee gives a fantastic summary of the generational argument for why crypto has a secular tailwind behind it. In brief, savers of the Silent Generation bought gold because they were marred by the global conflict that shaped their youth. These are the kind of large-scale geopolitical events that debase currencies broadly. The first Baby Boomers turned 35 and entered their prime saving years in 1982. That cohort reached its peak size in 1999. They favored equities and the S&P 500 was up 5x over that same period. Millennials are now entering their age of wealth accumulation and they prefer growth stocks and digital assets. Remember that currently the same proportion of this generation holds crypto as does individual stocks.

Because of gold’s unique performance during crises, it makes up about 1% of institutional assets under management. It would be a huge win for Bitcoin if it grew to match the yellow metal’s allocation. What might provide additional incentive for including BTC in portfolios is the notion that, in addition to being a non-sovereign scarce asset, it might have a future as programmable money.

In 2017, an important scaling solution called SegWit was made available across the Bitcoin network, enabling more transactions to be included in each block. This change coincided with the launch of the Lightning Network (LN) – an additional and exciting layer that sits above the Bitcoin blockchain – which had the promise of enabling instant and low-cost transactions securely. This was a big deal, since it brought back BTC’s promise as an online P2P cash system. Four years later, the Bitcoin network underwent another significant upgrade. Taproot added some privacy-related improvements and data efficiency that helped with scalability. The team at Lightning Labs wasted no time in rolling out Taro, a protocol that made use of the Taproot functionality and allows for new asset transfers like stablecoins. They raised $70M in a Series B to help fund the future development.

You can’t do that with gold.

Elizabeth Stark is a co-founder of Lightning Labs and her mission is to see “number of people go up” with the intention of using LN’s advantages in payments to help with financial inclusion. Of course, this effort leverages Bitcoin’s brand in countries where digital asset adoption is highest and where users stand to gain the most from lower costs.

The Lightning Network isn’t the only group looking to bring new functionality to Bitcoin. Fedimint seeks to further expand on LN with an emphasis on community and privacy. Stacks is an open-source blockchain network that leverages the security and breadth of ₿ for decentralized apps and smart contracts without additional energy consumption. Finally, RSK is a smart contract platform secured by the Bitcoin network and compatible with the Ethereum Virtual Machine (EVM). In theory, developers can import innovations from Ethereum and tap into Bitcoin’s security and scalability. However, as layers are added to BTC, the level of security is inherently weakened somewhat.

ETH’s pivot to proof-of-stake was a big step towards enhancing its attractiveness for institutions who focus on the environmental impact of their investments. Bitcoin is now effectively alone in the limelight when it comes to those concerned about proof-of-work’s carbon footprint. Nic Carter wrote a great article in the HBR to address the topic. He notes that BTC can use energy that would otherwise be wasted (like surplus hydro generation), and the proportion of renewable energy used by the network has been estimated to be as high as 76%. Further, mining uses the bulk of the energy and with less than 10% of the tokens still to be minted, the chain is likely to become greener naturally over time.

Going back to my original point, there’s a very compelling investment thesis for portfolio managers to make an allocation to ₿. Most of the thematic reasons why you’d want to own BTC are true for ETH too, but the latter gets more scare with usage and doesn’t require a bridge/intermediary to earn yield today. Ethereum has the clear environmental and innovation advantage, but it loses on size and scope. Something I didn’t accentuate sufficiently in my ETH thesis is that Bitcoin isn’t a security which makes it the only digital asset option for many. That’s a very appealing reason to own it.