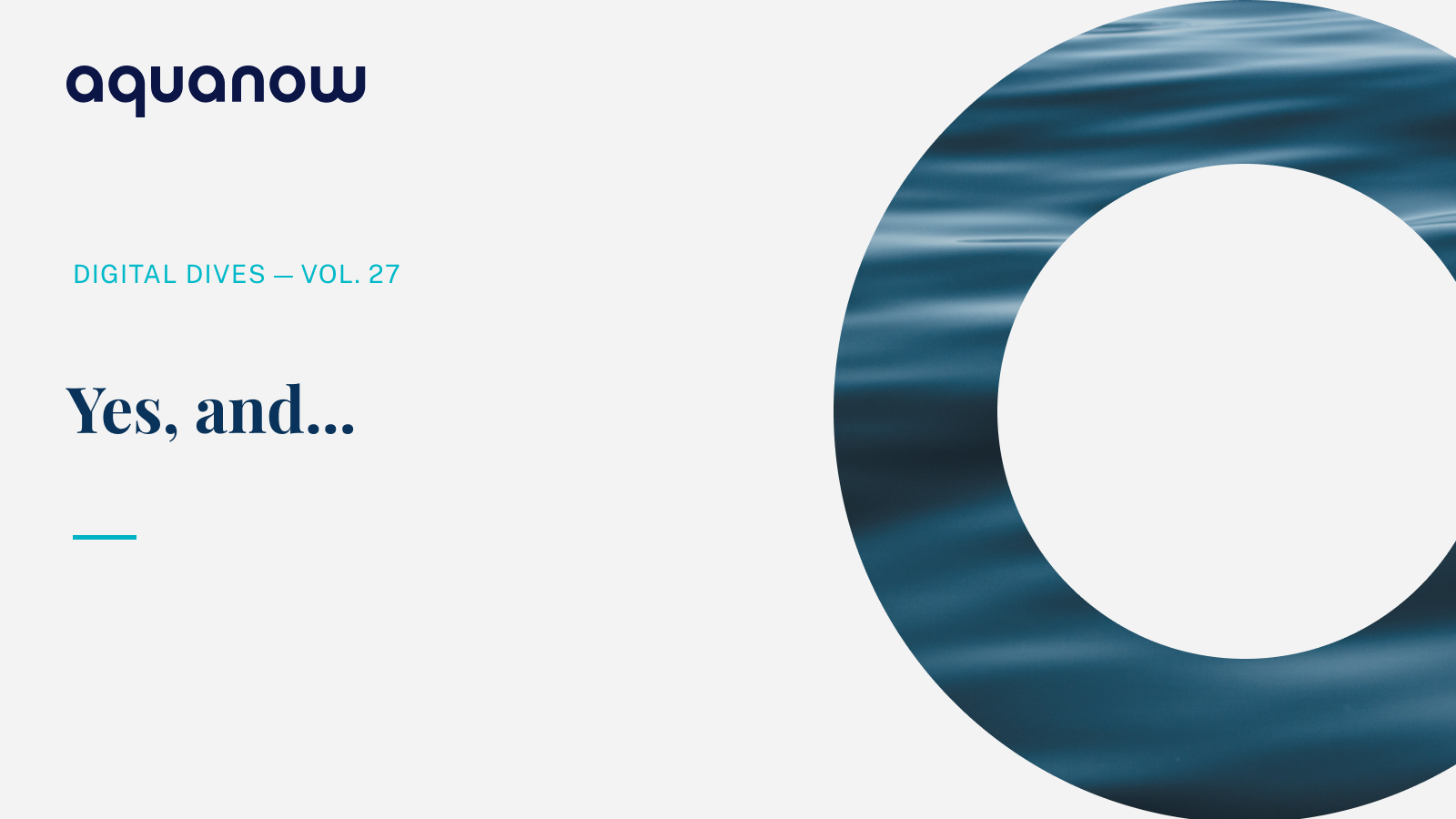 I attended an amateur improv show last Thursday and while watching the theater sports, I was reminded that a key philosophy to the craft is adherence to a “Yes, and…” mindset. While the occasional mishap or awkward silence can be funny, it’s important to sustain momentum during a script-less performance. Therefore, actors are encouraged to go with the flow and follow the cues their fellow artists toss out.

Performer #1 (Starting off the scene): “Hi Performer #2, that looks like a tasty ice cream cone you have there. Where’d you get it?”

Performer #2 (Came into the scene with some ideas of what to act about, but ice cream wasn’t one of them): “This isn’t ice cream, it’s an umbrella!”

Equipment to protect against the rain carries an entirely different context than a summer treat, so perhaps the audience would laugh at the juxtaposition, but now Performer #1 is left a bit stunned and must scramble to save the skit. When an idea is rejected like this it’s called blocking and it’s murderous to improv. To assure a dead scene, Player #1 could counter with “No, that’s definitely an ice cream cone…”

Performer #2: “It is good, but the Ice Cream Man who served me was creepy and I’m pretty sure some beads of his sweat fell into the bucket as he scooped.”

Here, you still get an audience reaction and Performer #1 has momentum which he can carry forward as opposed to having to start from scratch like the first example.

Being up on stage, armed only with your wit (and possibly some props) is daunting, so marginal improvements are a big deal. During the show, I noticed a couple occasions when a “Yes, and...” event was rejected and in one instance, you could see the irritation on the faces of the other actors as everyone had to hastily come together and accommodate the plot reversal. However, most of the time, the skits were well-executed as storylines developed in a random and organic manner. This has a suspenseful effect for spectators, making the laughs flow easier. The result is a successful improv comedy.

This got me thinking about entrepreneurship and the kind of mindset that’s effective within a start-up. The similarities between script-less acting and launching a venture might not be immediately evident but consider that both groups create something out of nothing, hone their output through the assessment of customer feedback, and can look really silly if they get it wrong. As Mary Lemmer, puts it: “Entrepreneurs are improv comedians, but with worse senses of humor.”

When you’re building something novel, there might not be any proxies to guide your development. Intrepid business plans need to stay nimble and let their progress be guided by the changing environment. As such, leaders place a lot of trust in their small teams, which requires them to genuinely listen to what’s being reported on at the client, technology, and personnel levels. A manager who consistently tells his staff “How it is” while they’re the ones gathering the intel isn’t likely to be very successful. Similarly, when a team is out raising capital and an investor asks a question, it’s poor form to respond “Oh, I’ll get to that later in the deck…” and continue to work through the prepared remarks. A more thoughtful executive would accept the interruption and pivot to a “Yes, and…” approach while providing a complete response.

At the risk of torturing the metaphor, if start-ups are improv comedy, then established businesses are classic plays. Despite being centuries old, a well-produced Shakespearian tragedy will still draw a crowd. Sometimes the shows are reimagined in a modern manner, but more often they stay relatively close to their roots. Staging a classic has the benefit of leveraging its tradition and brand, but this comes at a cost. Because those labels carry such respect, they weigh like an encumbrance to decision-making. “Why not make Hamlet Jabba the Hut?” In an improv skit, the natural response might be: “Yeah, and Mickey Mouse could be Claudius!” However, if you’re trying to pay homage to the masterpiece, then this all becomes a debate of artistic freedom versus integrity.

Similarly, a long-standing corporation has a business and brand that (in most cases) should be respected when planning strategically. For stakeholders, this is good because it provides stability of employment, partnership, and returns. However, it can also foster a culture where, instead of the dialogue being about “Yes, and...” boardrooms are filled with the chorus of “No, because…” Over time, the group becomes less nimble. In the worst cases, paralysis by analysis replaces trial and error, bureaucracy takes the place of initiative, and lunchroom banter is centered on the stock price instead of lore.

These types of workspaces play nicely to the human psyche. For the most part, people want to fit in and feel safe. Many organizations offer such an environment, which is probably why society has organized as such. Unfortunately, the typical enterprise is also a breeding ground for what Morgan Housel calls, The Seduction of Pessimism.

Sometimes negativity is good. Debating ideas can lead to stronger outcomes and sound risk management. However, leaders should keep in mind that they’ll never be able to forecast all possible outcomes, so eventually a decision must be made, and its consequences lived with.

How can a legacy institution avoid the myopia of pessimism? Another proponent of the improv mindset is Questlove. I’d recommend his Creative Quest for any maker looking to improve their process. He cautions that being in a groove can be dangerously close to getting into a rut. To combat this, the artist offers a corollary to Gladwell’s Ten Thousand Hours: “for every hour you spend working on something, spend at least a few minutes doing something unrelated” This reminds me of Paul Graham’s Things That Don’t Scale essay, which encourages start-ups to incorporate inefficient features into their offering to create a sort of moat that the hyper-optimized firm cannot compete with. Unfortunately, this type of behavior tends to be the first thing cut in a downturn and likely never returns thereafter.

The leadership mentality of an upstart firm should probably be different than that of an uncompromising incumbent. A scrappy new entrant has less to lose, meaning its cost-benefit analyses are skewed to the right. Meanwhile, executives at the grown-up firm enjoy the paycheques, pensions, and private jets, so their modus operandi becomes one of not breaking things. In time, if the former is successful in massively growing, then it’s likely to resemble its older cousin in many ways. However, some manage to strike a better balance here than others. Amazon seems to be a good example.

To date, web3 has been in a high flow state, where trying new things is the main objective. This is unbound creativity before filters and governors appear, but that’s all starting to change. If you’ve been paying attention to recent web3-related headlines, then you’d have noticed a significant increase in regulatory noise. While the IMF says that the recent collapse in digital asset prices didn’t have any spillover into the real economy, policymakers are worried that the ecosystem could grow out of hand quickly and are looking to enforce rules. How this will come together remains to be seen. So far, the common language has been around investor protection, KYC/AML reporting and stablecoin reserves. Offsetting the need to supervise those factors is the desire to foster innovation.

When broad legislation imposing rules on the digital asset ecosystem does come into effect, we should expect builders to continue their philosophy of “Yes, and…” However, it seems the young movement would be well-served to refine its approach. For starters, some laws may justify a “No, because…” approach where industry representatives engage with policymakers. Further, while the improvisational mindset is powerful, it has limitations. Scrutiny of ideas, establishment of processes and rote work are still necessary ingredients for success.

During an improv sketch, actors on stage must move a scene forward. The show can’t be just about blurting random thoughts. Businesses and DAOs also strive for continual progress. Creativity helps navigate the ever-changing landscape, but shipping product, tying off financial statements and voting on governance are equally important to balance. Start-ups have an affinity to operate along the creative spectrum, while traditional institutions have expertise in the more formal environments. As policymakers set the rules for web3 to scale up, both groups will see their relative strengths and weaknesses put to the test as they battle for market share. Alternatively, they can join forces and seek to marry the entrepreneurs’ innovative mindset with the procedural and regulatory expertise of the incumbents. The works they could produce have the potential to reshape capital markets, commerce, and the internet.