Aquanow Digital Dives: Whose World Is This? — Vol. 40 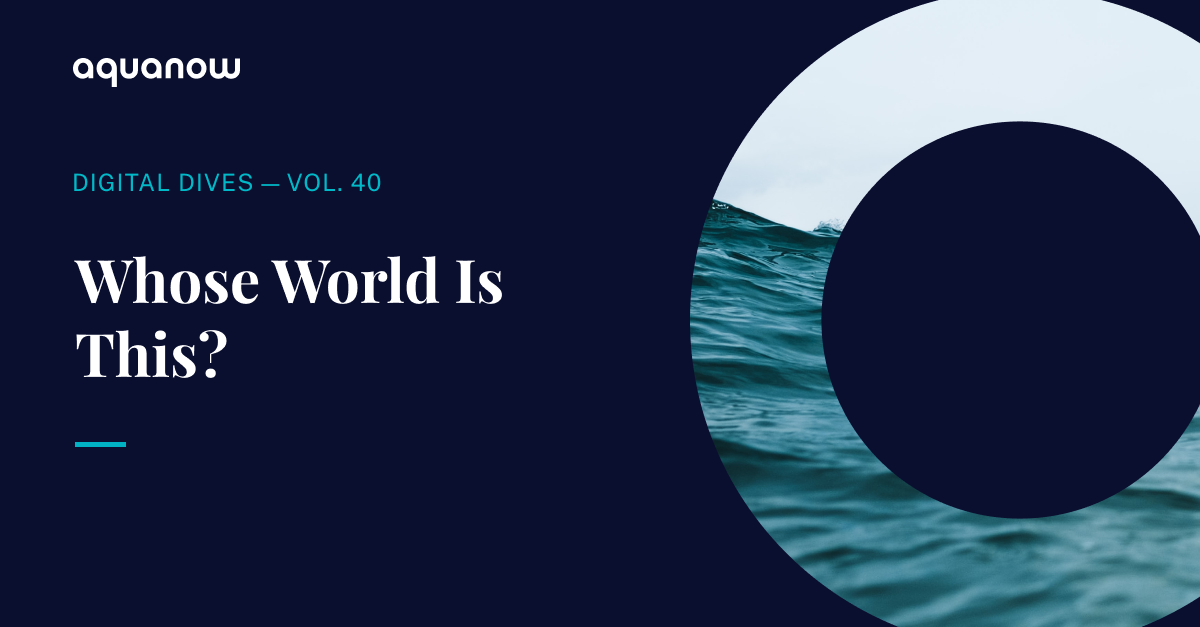 Aquanow Digital Dives: Whose World Is This? — Vol. 40
< Back to News & Resources

When BNY Mellon unveiled its regulatory approval for a digital asset custody solution in October, the CEO (Robin Vince) was careful to highlight that the company’s vision for this division extended beyond cryptocurrencies. Importantly, he highlighted that BNY would be building solutions for real-world assets represented digitally on-chain. The strategy is underpinned by market research which found that 97% of institutional investors believe that “tokenization will revolutionize asset management” and be “good for the industry.” Further, 88% of those surveyed planned to continue their related projects despite the market weakness in 2022. Well…  before the latest debacle anyways…

There are several reasons for the higher propensity to invest in these areas. The paramount motivation is the hunt for diversified sources of return. However, some other commonly cited causes are low rates from traditional sources of yield, greater management fees earned by alternative managers, and the potential for lower volatility when private funds mark their holdings. The last point is of particular importance - alternatives don’t typically trade on a secondary market. Therefore, once an investor commits, their capital is governed by the rules set out in the associated contracts and the economic forces impacting the investment.

Here are some key reasons why certain assets remain illiquid:

An important feature of alternatives is that they’re often reserved for accredited investors. Otherwise, their minimum commitment is sufficiently high and/or the level of sophistication to understand the assets is complex enough to dissuade retail allocations. While it’s important to protect people, there is sufficient free education available for interested parties to learn about evaluating non-traditional opportunities. I’m generally not a big fan of individuals taking exclusive ownership of their portfolios, but even most advisors would be precluded from allocating to alternatives due to their lack of liquidity. If the industry were to responsibly provide access to a broader set of investors, then more capital would be available to fund growth projects and financing costs would decrease.

Ok, so alternatives have interesting attributes for inclusion in portfolios, but many are precluded from getting exposure to them. How would tokenizing these investments remove the barriers above? Boston Consulting recently published a paper: Relevance of on-chain asset tokenization in ‘crypto winter’. From their research, I’ve summarized the key steps to representing an asset on-chain:

The first stage is not trivial. However, based on the comments from BNY Mellon and other traditional financiers, it’s clear that there are groups experimenting with processes similar to what’s outlined above. Further, the DeFi community continues to roll out interesting innovations that also represent real world assets on blockchains. Some of the most basic examples include collateralized stablecoins or tokens backed by precious metals. Moving out on the spectrum, MakerDAO has signed a partnership to collateralize their stablecoin (DAI) using corporate loans sourced by Huntingdon Valley Bank. Finally, even heavyweights like JP Morgan, SBI Digital Asset Holdings, DBS Bank, Standard Chartered, and HSBC revealed that they settled a multi-party foreign currency transaction using the Polygon blockchain and Aave. Though, most experimentation is carried out on permissioned blockchains with proprietary smart contracts.

Large financial houses already earn revenue from alternatives, and they dominate liquid markets like forex and fixed income, so why undertake the additional complexity to tokenize these assets? The table below provides a summary of the potential benefits:

There are apparent advantages associated with the digital representation of investment contracts on-chain. However, the related risks of capturing these gains are significant. Regulatory approval is critical, but beyond policy there are substantial investments in infrastructure needed to harvest the merits. How are typically risk-adverse enterprises justifying the hazards and costs associated with establishing these new platforms?

Indeed, some of the proof-of-concepts do fail to scale. The Australian Securities Exchange was told to rework a project that sought to bring blockchain technology to the settlement of equity trades. This resulted in a $245M - $255M pre-tax charge and another 18 months of development work. However, researchers who are passionate about this topic would have cautioned the ASX against this endeavor at the onset.

Teej Ragsdale, Jack Chong, and Makund Venkatakrishnan published this Unreal Primer on Real World Assets, which is a must-read for anyone interested in the topic. They provide the following as a roadmap regarding how they estimate tokenized real-world assets will proliferate.

Some examples of illiquid assets that are likely to derive the greatest benefits from liquidity and hence are most likely to see early adoption of tokenization are illustrated here:

Not unlike Clayton Christensen’s disruptive innovators, the efficiencies of tokenization are most acute for typically underserved groups (speculative assets and developing jurisdictions). Mature and highly liquid asset classes don’t need to adopt this tech. It matters more for a smaller number of highly motivated actors because moving assets from illiquidity to having secondary trading releases trapped value. Further, the in-place infrastructure is approved by regulators. Finally, margins in stocks and tradeable debt securities are already thin, so allocating a bunch of capital to revamp these segments isn’t very attractive. The way blockchain supports the trading and settlement of illiquid assets, motivates its use because there’s a greater proportional prize. Later, it probably makes sense to incorporate already liquid assets, too.

We’ll pick up this topic again next time with a closer look into what specific projects are being worked on.

Nas’ “The World Is Yours” is a fan favorite from his breakthrough album Illmatic, where most songs provide vivid imagery from the perspective of inner-city youth. I’ve drawn parallels between hip-hop and digital assets before and its worth bringing attention to them here too. Rap music was vilified, and many tried to cancel it. Frankly, several hip-hop superstars did horrible things that tarnished the positives of the movement, but it still resonated with a small subculture and eventually attained mainstream status. Some hate what’s become of rap and purist underground cliques remain on both sides. Zooming out, it gave a voice to an underserved community which has since catalyzed positive social action. I’m not saying tokenizing real-world assets will be as profound, but it does… rhyme, no?

Dwelling in the Rotten Apple, you get tackled

Or caught by the devil's lasso, shit is a hassle”