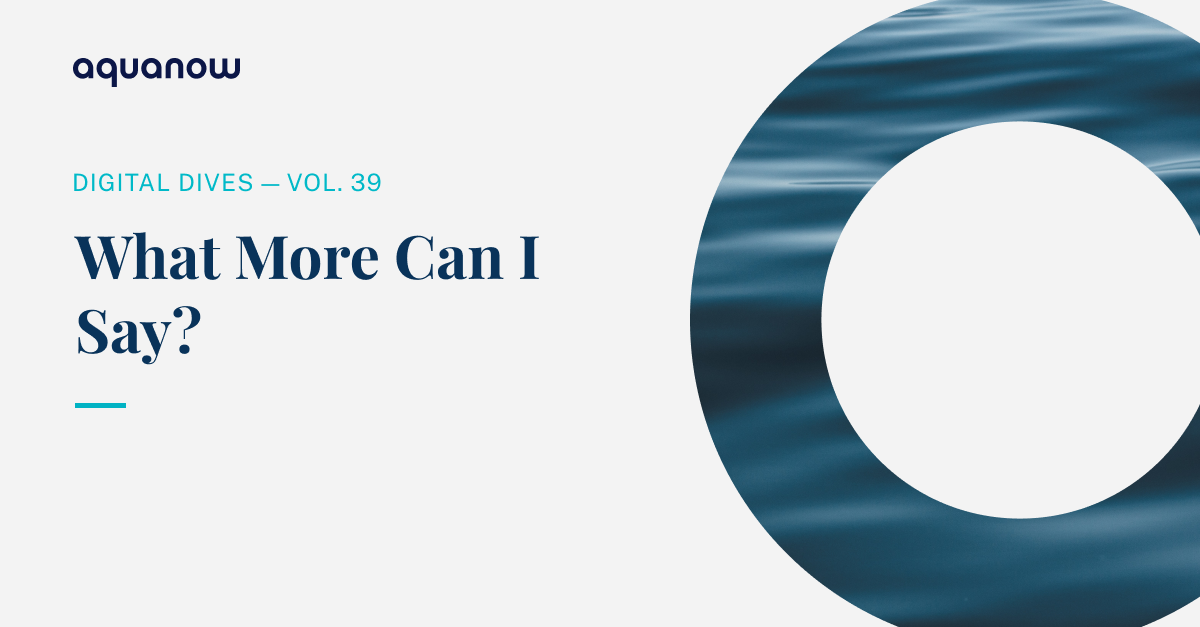 Aquanow Digital Dives: What More Can I Say? — Vol. 39
< Back to News & Resources

The most important narrative in crypto is that younger generations are becoming the dominant consumer force and they’ve adopted digital assets. Frustration towards centralized institutions had fueled the early acceptance of finance on a blockchain. Unfortunately, 2022 has seen several centralized parties in the digital asset ecosystem collapse in similar fashion to the banks that failed during the subprime mortgage crisis. Could this undermine the thesis that Millennials and GenZ will be the foundation for mass adoption?

I don’t think so. The early adopters of Bitcoin were looking for an alternative financial system, but something considerably more vibrant has evolved. Web3 has extended the application of blockchain technology beyond finance and many passionate devs will keep building. Further, there will be no government bailout and authorities have shown a willingness to jail deemed bad actors in crypto. Thus, we can expect more accountability than what followed the Great Financial Crisis. Finally, young people have a propensity to like things that are bad for them (booze, cigarettes, etc.).

The events of the past week will unquestionably leave an impression on the digital asset ecosystem.

Let’s borrow from historical analogs to get an idea of how the current situation could play out.

In the mid-1800s, Free Banks operated outside of federal oversight. The groups were still regulated at the state level, but auditors were often overworked, so problems slipped through the cracks regularly. These Wildcat Banks were so-named because they were located in such remote areas that you’d have to be an animal to access them.

In those days, notes bearing the banks’ names would circulate as a medium of exchange. They represented the liabilities of the financial institution and were redeemable for gold/silver (sometimes even bags of flour). However, collateral was maintained sparsely (or was invested in risky state debt) and most of the lenders went bust. Eventually, the number of well-publicized frauds led to sufficient public support for a national banking regime. A taming of the Wild West ensued.

The National Bank Acts of 1863 and 1864 established a federal financial system and brought commercial banks under the purview of the U.S. Government. National banks had higher capital requirements and were not allowed to loan more than 10% of their holdings, which provided added safety.

The fact that we generally consider banks to be reliable today is because of regulation. People who use exchanges or centralized lending platforms to gain exposure to cryptoassets should be aware that their funds aren’t as secure as deposits in a savings account. However, the fiduciaries who keep watch over those assets should be held to a high standard of care.

Unfortunately, humans can justify all kinds of behaviour under the influence of fear or greed, so like we saw with the wildcat banks, it is generally advisable to have some central party oversee industry and enforce legislation. This has consequences of its own like rising costs, regulatory capture, bureaucratic inefficiency, etc. but it’s meant to avoid situations where hard-earned money evaporates due to malfeasance.

I think a similar fate lies ahead for the digital asset space following the string of high-profile collapses in 2022. Crypto had been making gains with regulators through education and engagement. However, the nature of the scandal this week undermines web3’s lobby effort and will likely incite lawmakers to favor heavy-handed regulation. At this point, most of the public would be in favor of such an outcome and the industry doesn’t have much moral high ground from which to argue.

Following the financial crisis of 2008, Dodd-Frank (and Basel III internationally) ushered in a new era in bank supervision. While the capital markets and investment banking divisions had been growth engines in the years prior, those desks began to shrink. A typical bank’s job board now features a disproportionate number of openings in the risk and technology departments. The former is self-explanatory, but for the latter, it’s important to keep in mind that much of the IT work at a modern financial institution involves securing data, monitoring staff, and modelling risk, so both functions have common objectives – identifying and managing any threats to the coveted capital buffer.

During my time in TradFi, it was clear that banking was adopting a culture of risk management. The industry had been heavily regulated before the subprime crisis, but the level of deliberation was stepped up significantly. The change was noticeable but didn’t require a wholesale shift in company doctrine. In contrast, it seems that most crypto natives philosophically disagree with the idea of KYC/AML reporting or obtaining licenses to operate as broker dealers, etc. So, when the impending policies come down, it might feel like an existential crisis for many. Not only that, but compliance is hard.

To me, the nuances of the digital asset space warrant a fresh and new approach to setting rules. It seemed there was a balanced conversation happening between industry and lawmakers that would preserve some degrees of freedom. That’s off the table now. The recent headlines and drama have caught the eye of the U.S. Department of Justice and regulators around the world. Crypto isn’t big enough to cause systemic risk today, but officials know it will keep growing and they want more direct influence.

This week’s calamity is good news for all the incumbent financial institutions who’ve announced their entry into the digital asset space recently. They’re well-versed in oversight and have long-standing relationships with policymakers. When it comes to rolling out solutions for other TradFi firms, they speak the same vernacular and empathize better, which will make it easier to secure business relationships and bring digital asset functionality to the masses.

What about the buildooors? Sadly, the impending regulation will add friction to the creativity and rapid pace of innovation in the space. The neat thing about technology is that many of the coolest projects start as hobbies, so there will always be smart people running experiments at the margin. Plus, the most interesting aspects of web3 aren’t financial. Social applications should come out relatively unaffected. However, projects involving economic assets that want to scale up and tap into institutional capital will have to comply with KYC/AML, registration, etc. It’s a painful trade-off, but so is repeatedly watching billions of retail savings vanish due to inadequate risk management.

I hope the memes are here to stay.

The digital asset ecosystem will remain vibrant for many years to come. Increased regulations should help reduce the loss of funds and may even provide a backstop for when things inevitably go wrong again. However, as the influence of regulatory natives expands at the expense of crypto natives, the pace of innovation can be expected to slow. This will usher in a new era of being more serious and less explorative. Maybe some would say, a little more "grown up"?