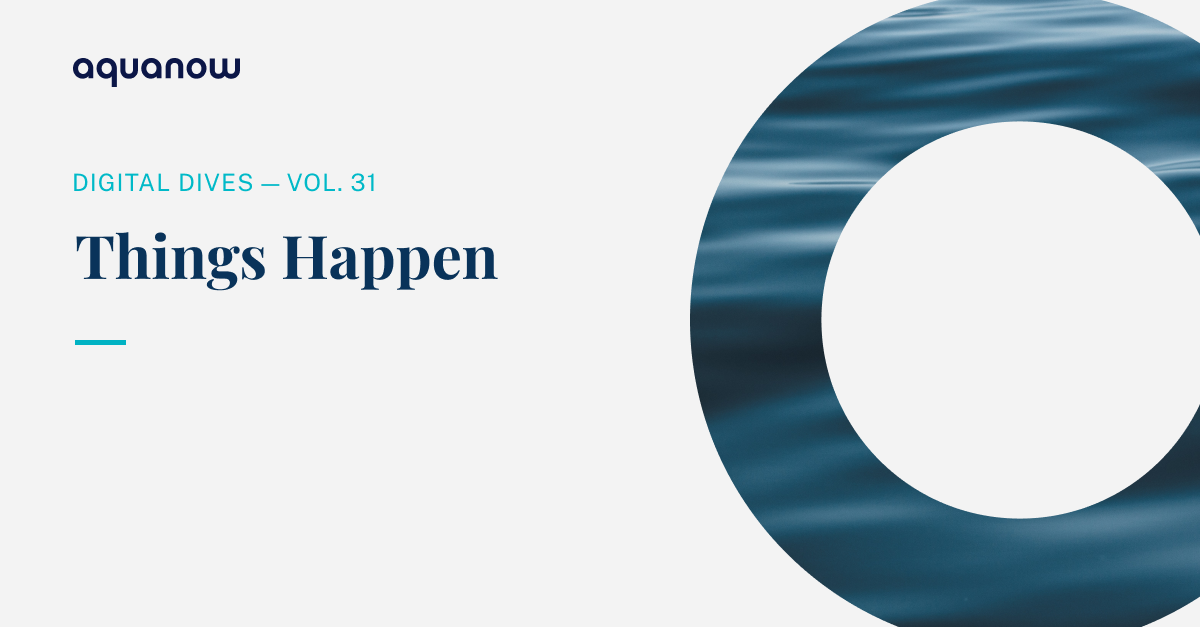 I was back home for a celebration of life this week. This marks the fourth such event for my family in the past three years. All were characterized by accounts of how the deceased had profoundly affected the lives of others and several wondered why their time had come so soon. Why do bad things happen to good people? I’m not sure that’s the right perspective. Let’s consider a lottery winner, who could be a “good” or “bad” person. As it turns out, there’s a 70% chance that they’ll file for bankruptcy within a few years. The takeaway is that things happen and its how we react to the events that matters.

If we zoom out from personal experiences to the digital asset space, then a similar finding applies. Be it the timing of the Bitcoin genesis block coinciding with the Great Financial Crisis, or heavy-handed regulation, there’s an element of randomness and ensuing reaction that shapes the future path of development. Stepping back even further, the events of WWII were extraordinary in that they catalyzed a world fraught with ideological differences, and where communication lines were still primitive, to band together against a common threat.

We can learn from the dualities discussed above and apply them today. Unfortunate circumstances arise at every level of life, but people have the choice of response. Losses can help build resilience, deepen relationships, and generate an appreciation of the “little things”. Wins can embolden, drive progress, and compound. However, both have the potential to break us, too.

Surely, there have been periods since A Tale of Two Cities was published that wouldn’t be characterized as “the best of times” but the rapid pace of technological innovation has created a general improvement for humanity. On the other hand, there’s also a steady narrative that people are more depressed than ever. Similar themes apply to the digital asset markets as well. As new applications and better interfaces attract a broader array of users, there are also more scams and negative press.

During the French Revolution, the uprising against a prominent monarchy represented a turning point for oppressed civilians. Despite a significant loss of life, the event proved to be a “spring of hope.” However, for an ancient regime and outgoing political system, the uprising was a “winter of despair,” which led to death and the erosion of fortunes. Similarly, when the calendar turned earlier this year, and digital asset activity began to roll over, we experienced an “epoch of belief” as builders hunkered down and continued to ship innovative products, while simultaneously living through an “epoch of incredulity” as traders couldn’t believe the state of their portfolios after several high-profile liquidations.

Consider the duality of leverage and web3.

Humans are naturally loss adverse, so you’d think that the risk of peril would keep us away from margin trading. However, we also suffer from overconfidence and often find ourselves drunk on this bias, so the temptation of a quick win leads many to invest borrowed funds. Leverage in digital asset markets remains a go-to strategy for many. Cryptoasset prices have been decimated in 2022, but after a couple weeks of gains, many rushed into margin trades just as the seemingly improving macroeconomic backdrop took a turn for the worse and $537M of liquidations from 156K accounts were processed on August 17th.

This type of degen behaviour is often discussed as a headwind for broader web3 adoption, but it may have also kickstarted its expansion. The world started paying attention to crypto when seemingly quasi-literate kids started posting pictures of their Lamborghinis online. This expanded the marketplace by drawing in more sophisticated players from traditional finance and computer science. Network effects took hold. Several traders demonstrated acumen (others were outright lucky) and fortunes were compounded.

These internet-dwellers wanted novel ways to demonstrate their commitment to blockchain technology while flexing their wealth and NFTs emerged as an outlet to accomplish both. When pixelated images of punks and rocks began fetching seven-figure prices, several artists took note and unique pieces started to sell for 10x the earlier eye-popping prices. Consumer businesses saw this technology as an opportunity for deeper engagement and now several industry leaders have a web3 strategy. A trillion-dollar industry emerged and continues to expand adoption even during its darkest days.

There are warnings all around us.

The other day, I saw the picture below and felt “Wow, that is so cool!” Second order thinking reminded me that the image was made possible due to a horrendous drought, which has lowered the water table so significantly that the prehistoric footprints were made visible. There have been similar historical discoveries in Europe and Asia as well. In the former, remnants of the great wars that marked the first half of the 20th century provide a dangerous reminder of the perils of combat. In the latter, a drought-ridden Yangtze River exposes 600-year-old Buddhist monuments.

In recent weeks, ETH jumped 125% off its YTD lows as market participants grew more confident that the blockchain would successfully transition its consensus mechanism away from the energy-thirsty proof-of-work towards proof-of-stake, which is 99.5% more efficient. A key motivation for this evolution is increased sustainability in the face of climate change. It’s also an incredible engineering accomplishment. At some future block, the entire chain will convert to a new underlying process and yet the robust application layer sitting above will be unchanged. If successful, this should add credence to the potential for decentralized computing systems. Further, it shows that the community is committed to the environmental cause. Taken together, these events should be considered a big win for the space, which was borne out of adverse circumstances.

As discussed, existential threats have the potential to break, but they can also galvanize. For many years, Europe had been leading the way in clean energy subsidies and development. Unfortunately, now they’re the poster child for what happens if your energy stack is inadequately diversified. Canada tried to clean up its ESG footprint by curtailing energy infrastructure construction. Now, natural gas sells for $2.50 in Alberta, while it goes for $9.40, $80 and $60 in the US, Europe and Japan respectively. Moments like these provide excellent and yet painful assessments of strategy. The narrative has slowly shifted away from the idea that “there is no climate/energy crisis” to “what should we do about it?” Different sides of the political spectrum currently disagree on the path forward, but society is closer to being unified on the idea that something has to give.

Excesses in the digital asset ecosystem have drawn the attention of regulators, which has prompted engagement and action. While tribalism in the space remains ever-present, it seems to have faded because there are greater threats ahead. Lawmakers have begun to roll out comprehensive new rules that will shape web3’s development.

Previously submerged wreckages of wars that cost humanity millions of lives, while simultaneously bringing different nations together along shared values can also be viewed symbolically. The war that rages on in the Ukraine is a high-profile travesty and has exposed a shortfall in global natural resource allocation.

The newly exposed dinosaur prints are a reminder that once-dominant species have disappeared from the face of the earth, which has the potential to provide a meaningful signal to the world. That they’re in a Texan river basin has an added twist of irony, but I digress…

Crises are leaving their mark on the globe and digital asset markets. Will we choose to understand these threats as opportunities to make investments in our collective resilience? How long can bureaucracy and ideological difference create a stalemate? No one knows the answers, but it seems like we’re marching a path to finding out soon. Let’s hope the pattern of coming together for collective benefit persists.