Aquanow Digital Dives: The Song is Ended, But the Melody Lingers On 🎶 -Vol. 17 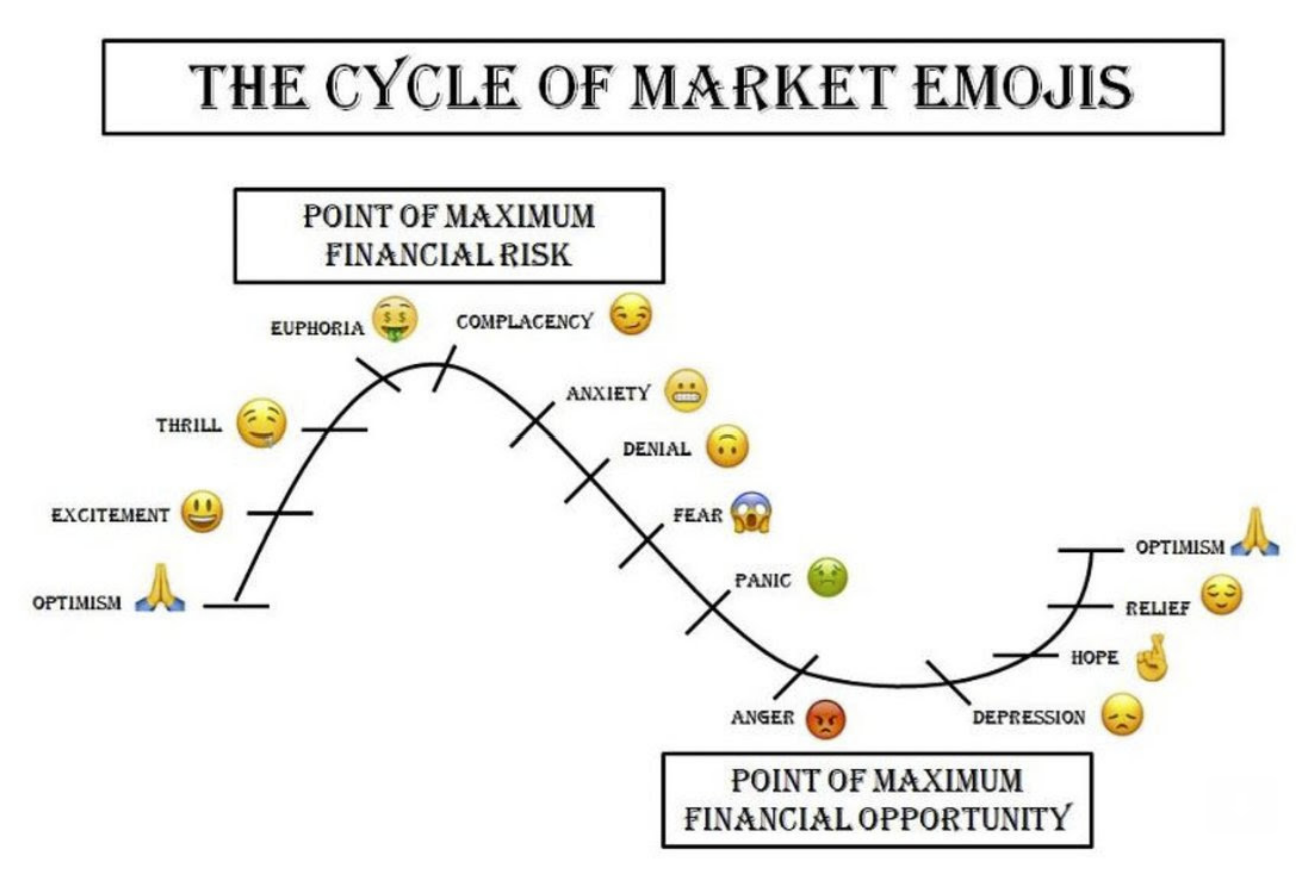 Aquanow Digital Dives: The Song is Ended, But the Melody Lingers On 🎶 -Vol. 17
< Back to News & Resources

A couple months ago, I read an inspiring interview with Mellody Hobson from Ariel Investments (an asset manager with $18B of AUM). At the age of 17, she joined the firm as an intern after earning a BA from Princeton in 1991. By 2020, she’d climbed the ranks to be named President and in 2019, the company’s founder sold Ms. Hobson a 14% stake (taking her ownership to 39.5%) and split his CEO role with her. In addition to a number of philanthropical responsibilities, Ms. Hobson is the Non-executive Chair of Starbucks and serves on the Board of JP Morgan Chase. Taking the 1,000-foot view, this career path would have the classic hockey-stick shape that is coveted by markets. However, zooming in at different periods, an observer would note considerable adversity which had to be overcome.

The youngest of six African-American children born into a household run by a single mother in Chicago, Mellody has commented often about her struggles as a youth: “[S]he worked really, really hard, but we often were in tough situations of getting evicted or getting our lights turned off, or our phone disconnected, our car repossessed. Sometimes I didn't know where we're going to live.” (Source) However, these comments are quickly flipped into how such an experience provided her with a sense of financial insecurity that served as a fuel to work hard in school and make non-traditional career choices. Instead of going to work at a big Wall Street firm, Ms. Hobson elected to join a relatively smaller shop in her hometown. The upside was that she got to work alongside the main decision-maker, and she felt he’d better foster her talents.

During the Great Financial Crisis, Ariel was shedding assets as clients who’d previously valued the manager’s risk control during turbulent markets were calling in regularly with redemptions:

This is logical. In the middle of a storm, it doesn’t make a lot of sense to guess when the weather will change – making it through should be the focus. Similarly, when it comes to turbulent macro forces that influence markets, it’s often a better practice to try and understand what’s going on than to predict what will happen next. This isn’t to say that we shouldn’t keep an eye on emergent trends, but it would serve us better to study sources of flux than to estimate when specifically, their impacts will be felt. Lately, my inbox has been flooded with emails from various prognosticators trying to decipher if we’re in a bear market, and if so, how long it will last. It’s true that it’d be quite profitable to have this foresight but understanding that market timing tends to be a futile endeavour, it would serve us better to concentrate on building resilience so that our portfolio or project can survive the downturns and thrive during better times. Ms. Hobson had these motivational words for young women on this podcast with Reshma Saujani and I think the digital asset space can learn from them too:

“If you took everything away from me right now today, I promise you I’d still know how to exist. That is a gift. Because a lot of people can’t do that. So those of you out there, who are struggling and are thinking ‘this is unbearable’. You are creating so much resilience in yourself that will make you a warrior one day… The road doesn’t necessarily get easier. I wish I could say that, but you get stronger. You develop mental memory for these moments, and that mental memory will get you through.”

After the dot-com bubble burst in the late 90’s, many believed that bandwidth in the U.S. had been overbuilt. Surveying the lay of the land, this would have been a reasonable conclusion. As Gavin Baker discusses in this interview, it took 15 years before the excess supply of fiber and optical components that were installed. With the help of hindsight, we can now appreciate that its not quite that simple. YouTube, Netflix, etc. built empires based on the availability of cheap network power and spawned entirely new business models that were called crazy before. I don’t know if today’s setup in web3 is analogous to the early 2000s, but it doesn’t seem like too much of a departure. As NFTs burst onto the scene many consumer companies jumped in and there were clear signs of exuberance.

It’s possible that some will wonder why they got involved with non-fungible tokens or blockchains and I wouldn’t be surprised to see some turnover as a result. On the other hand, as Chris Dixon notes in his piece with The Generalist “we could be entering an entrepreneurial golden period.” He believes that blockspace might become one of the most valuable commodities in the coming years. Just as no one (or at least very few) had foreseen how the internet would evolve after the bubble burst, the next period of growth will likely be influenced by new and innovative business models. In fact, because things seem to be moving so quickly these days, it’s possible that we’re already getting a glimpse of this through ”tokengated” economies.

It’s a bad practice to hope for the downfall of another. Having said that, something to be optimistic about in down markets is that when projects fail over the course of the cycle, then the surviving teams can be buttressed with the talent that gets shaken out. It might be too early to proclaim the Terra ecosystem dead, but it seems rational to think that their growth prospects have been curtailed significantly. This is good news for others as many devs had been going to build over there:

Again, I’m not making light of the circumstances, but this is a natural occurrence and the recirculation of talent this way helps the ecosystem by distributing knowledge and skill. Best practices can be disseminated broadly, and then iterated upon to meet new use cases.

Jim Cramer has been meme-ified as a counter-indicator, so you don’t want him to tout your bags. However, he has a saying that resonates with my optimistic tendencies. You can often hear Mr. Cramer exclaim that: “there’s always a bull market somewhere!” While it might be tough to find clusters of tokens trading at all-time highs, this note from Dapp Radar suggests that while DeFi and NFT volumes have ben languishing, the GameFi space is heating up. It seems that one way to pass the time in a bear market is playing games with your friends and perhaps even earning a little in the process.

We’ll have to see how this plays out because many blockchain gaming projects currently rely mostly on the economic incentive to draw-in users as the interfaces are currently lacking. Many games don’t differ much from the process of yield farming where players complete a series of mouse-clicks, then come back a few hours later to claim a reward and do it all over again. However, there are some projects in the works from established gaming studios or teams of talent who used to work at them, which are trying to tackle the graphics/gameplay in addition to building an on-chain economic system.

Is it possible that the current downdraft evolves from something more cyclical into a structural shift in web3’s potential? Just as policy errors at the central bank level can cause or prolong an economic recession, a misstep from lawmakers with respect to regulating crypto could dramatically dampen the movement’s potential over the coming years. While events like the UST meltdown provide the media with ample opportunities to highlight the current downfalls of digital assets, there are passionate groups that continue to engage with officials to emphasize the beneficial attributes of these emerging technologies. These advocates also have several tools for the offensive to facilitate the messaging (no blockchain projects have asked for a bailout, nor have taxpayers funded executive bonuses) and there have been some non-UST headlines recently that can help their cause. For example, there was the temporary ban of the Bankless YouTube channel for no apparent reason and the fact that the sell-side’s favorite listing mechanism of the post-COVID era, the SPAC, has seen dismal results lately. The former is an example that today’s platform companies can unilaterally control the flow of information, silencing voices as they see fit. The latter is an indication that, investing in early-stage enterprises is an inherently risky business that can result in the total loss of capital - even in regulated markets.

Bringing it tall together, I think that the web3 community can learn from examples like Mellody Hobson. When times get difficult, it’s important to focus on developing skills and fostering a mindset that can carry one through to the next phase of calmer conditions. She turned her childhood tribulations into a fuel that ignited an unwavering work ethic. This determination has helped her blast through social biases and achieve success at the highest levels of business and philanthropy. The digital asset markets have been purged of euphoria and pessimism is setting in. This provides an opportunity for the teams that remain committed to demonstrate resilience and come out stronger. As he often does, Punk 6529 says it well: