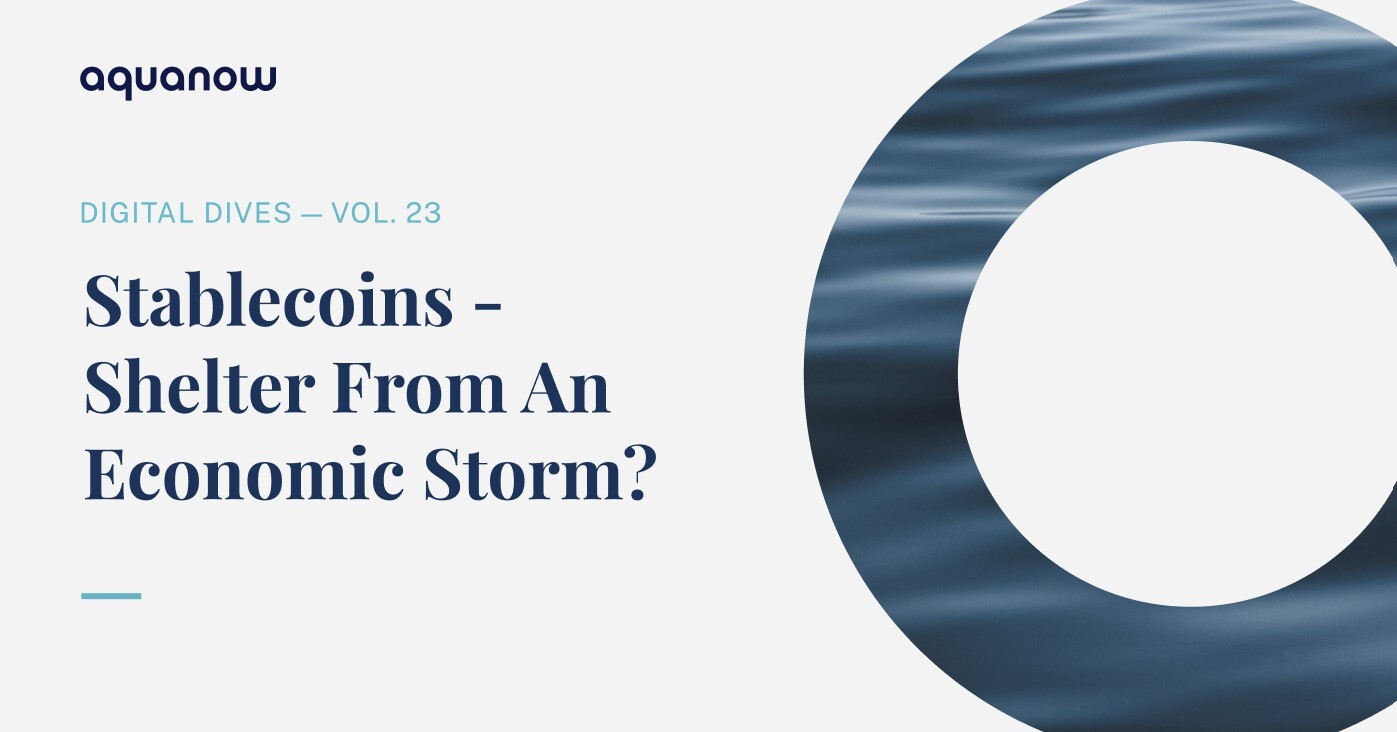 To capture our attention, media outlets often appeal to our loss aversion by broadcasting bad news stories. When it comes to digital assets, the talking heads tend to be negatively inclined even during the good times, so when projects and funds blow up on greed or poor risk management, you have to dig extra deep to find an optimistic storyline. As we discussed last week, some communities continue to advance their initiatives regardless - or perhaps even in spite - of all the negativity. I believe these pockets of builders could contribute meaningfully to the next wave of adoption. At the very least, they’re a nice reminder of why it’s great to be contributing to the internet’s evolution. In addition to the ingenuity targeted towards creating better web3 experiences and unlocking novel use-cases, there might be an opportunity for existing technologies to see greater adoption as the economic cycle turns. Unless of course, we let it get out of hand, too.

The predominant narrative in financial markets is that we’ve entered a different regime as it relates to inflation and interest rates. For the past three decades, consumer price increases have been muted or negative in many sectors and borrowing costs have trended lower.

However, after thirty years of increasing global coordination, the world now finds itself battling significant differences in doctrine, which are impacting supply chains and cost curves. Varied policy responses to COVID-19’s persistence, a War in Ukraine, central bank agendas which differ from that of the elected officials, and conflicting environmental concerns vs. energy security lead many prognosticators to conclude that a global recession is imminent.

When portfolio managers fear that economic weakness is forthcoming, they overweight safe assets, the most sound of which remains the U.S. dollar. Rising demand for USD has the effect of depressing the currencies of emerging market (EM) nations, which doesn’t bode well for consumers in those markets. JP Morgan strategists describe the situation in their Mid-Year Outlook:

“EM assets are typically pressured in such an environment with financing costs rising and the availability of capital being reduced, as seen in YTD EM bond outflows. This in turn puts stresses on EM credit markets where financing is needed, EM currencies and EM local rates. The unknowns from the great unwinding of over a decade of loose financial conditions keeps the bar high for adding quickly back to EM fixed income assets in H2, despite a large drawdown in returns YTD”

None of this is good news if you’re a saver in a developing country and it’s particularly tough if you’re not sufficiently wealthy to access foreign markets. Global institutions can reallocate their portfolios away from EM assets into safe havens like U.S. Treasuries. However, a foreign retail pivot to USD-denominated assets is trickier than it sounds. FX conversion spreads are wide, many currency brokers charge exorbitant fees, and in some instances, the act is controlled or illegal. The result is that consumers and businesses outside the G-10 must sit back and watch their relative purchasing power be eroded.

The tagline “there’s an app for that” was popularized by Apple in 2009 when the iPhone was starting to gain momentum. Today, as digital assets proliferate across the web, we can modify the slogan to be “there’s a token for that.” Oof – that’s cringe, but bear with me. In the case of foreign savers wanting access to secure stores of value that serve as global mediums of exchange, there are many such tokens. USD-backed stablecoins can be purchased on exchanges (decentralized or otherwise) using a computer or mobile device. Further, those assets can be lent out to a protocol-based liquidity pool to earn some interest. Unfortunately, with rates around 1.5% - 2.0% for institutional-grade projects, the real return would still be negative given inflation is trending around high single-digits across the world, but this still seems like a better alternative to the scenario painted by JP Morgan’s desk.

As discussed, a wealthy investor from a foreign country would have greater access to investments beyond their domestic markets through brokerage houses, corporate structures and so on, but the average retail saver likely would not. Apart from the pandemic induced shuttering of the economy, stablecoins haven’t been around for a global recession, but they might gain significant acceptance if economic growth does indeed flip negative. COVID was an important catalyst for sending Axie Infinity’s user growth soaring, so I wonder if we might see stablecoin adoption increase meaningfully on the basis that smaller investors can now access dollar-denominated assets to preserve their wealth during a period of capital flight.

This HBR note digs into “disruptive innovation” - a buzzword which is often overused while describing any situation that an industry is shaken up and previously successful incumbents stumble. A real disruptive innovation is one that originates in new or low-end market segments. Further, disruptive innovations don’t move to the mainstream until quality catches up to the standard expected by the masses. These features allow the technologies to build a following while the incumbents stay focused on more profitable consumer bases who view the disruptor as inferior. Related to this is the idea of creative destruction, which was originally coined by the Austrian economist, Joseph Schumpeter in 1942 when he described a “process of industrial mutation that incessantly revolutionizes the economic structure from within, incessantly destroying the old one, incessantly creating a new one.”

Is it possible that, in the context of household saving in emerging markets, stablecoins and DeFi lending could be seen as disruptive innovations in banking and wealth management? It appears as if the necessary conditions are in place. Many retail savers in developing countries don’t even have access to banking services, let alone global assets, so they represent a “low-end market segment” that isn’t of interest to incumbents. Stablecoins, mobile wallets, and payment infrastructure have the potential to serve this heretofore ignored subset of consumers.

On and offramps to the digital economy are likely to pose a problem for frequent conversions of fiat into stablecoins, but consider these remittance statistics:

In many of the countries above, the flow of foreign retail payments accounts for more than 5% of GDP, which is significant. Capital moving from developed countries to families in less fortunate nations is subject to frictions related to legacy payment networks, which means disbursements typically take time and come at a high cost. However, blockchain technologies have the potential to vastly improve how money circulates around the world. Let’s take the War in Ukraine as an example: It’s estimated that about 30% of the credit/debit card donations to fund the defense effort were cancelled because several “local banks looked at transfers to Ukraine with particular scrutiny” so the transactions were rejected. Fiat has still been the main source of donated capital but crypto has accounted for nearly 40% of donations and its greater integration with the broader system has proved helpful:

A lingering problem for the 70% of successful traditional payments is the price of the transfer. The World Bank estimates that the cost of sending remittance to the Ukraine is around 6.5% and with transfers forecast to approach $20B this year, saving on transaction fees would be substantial. Donations have already started to taper as developed nations increasingly fear a looming recession. The digital asset bear market isn’t helping the situation either. Each percentage point of savings would mean another $200M of aid, so a less costly cross-border network could go a long way. Parties with sound KYC controls but limited crypto experience could even use an intermediary like Aquanow to avoid having to manage direct wallet interactions. Here’s an illustrative example:

This is only one possible use-case, but already the potential savings are in the hundreds of millions. You can imagine the impact from the increased transfer of wealth if the entire ~$1T market were to be disrupted.

Should remittance flows begin to favor stablecoins, then it seems likely that token transfers among locals to settle debts, purchase goods or pay for services would become common. In time, the creation of networks to move between digital currency and fiat might follow. Maybe family members in the developed world would even ask to receive their pay in digital currency directly to smooth the process further? The advantage would be that families in the less affluent communities would retain more of the funds received from overseas due to lower transaction costs and the purchasing power of those disbursements would be preserved. Any surplus could be held as dollar-denominated savings and possibly even invested safely in DeFi. The IMF discussed such a future in a paper earlier this month:

Sadly, this isn’t a panacea. Should the foreign use of USD increase substantially, then there could be further destabilizing effects and it might exacerbate FX and interest rate volatility for emerging market central bank-issued currencies. Nevertheless, there does seem to be tangible and imminent benefits to greater use of stablecoins in the global economy, which is commanding the attention of policymakers. In fact, we know they’re already studying how to operate in the evolving reality where all money becomes programable. However, the bad press surrounding the digital asset ecosystem might mean that regulators take the tech in-house and build the digital economy using their own closed systems:

A key tenet of Clayton Christensen’s study of disruptive innovation is that the incumbents either don’t see the scrappy start-ups coming or they simply ignore them to focus on their higher margin clients. Though, it seems that regulators and embedded executives have read The Innovator’s Dilemma because they’re all paying attention to what’s happening in digital assets now. The technology has massive potential to reshape society, but unfortunately avarice and ignorance has resulted in a situation where the grass roots communities could have their innovations copy/pasted onto legacy structures. In either case, it seems that creative destruction at the hand of digital assets is coming. Who knows, maybe greater oversight will save us from ourselves?

For a more fulsome discussion of how digital assets can play an important role in charitable fundraising and other ways web3 can be additively integrated into social causes, check out this paper.