Aquanow Digital Dives: ETHer You’re In or You’re in the Way — Vol. 36 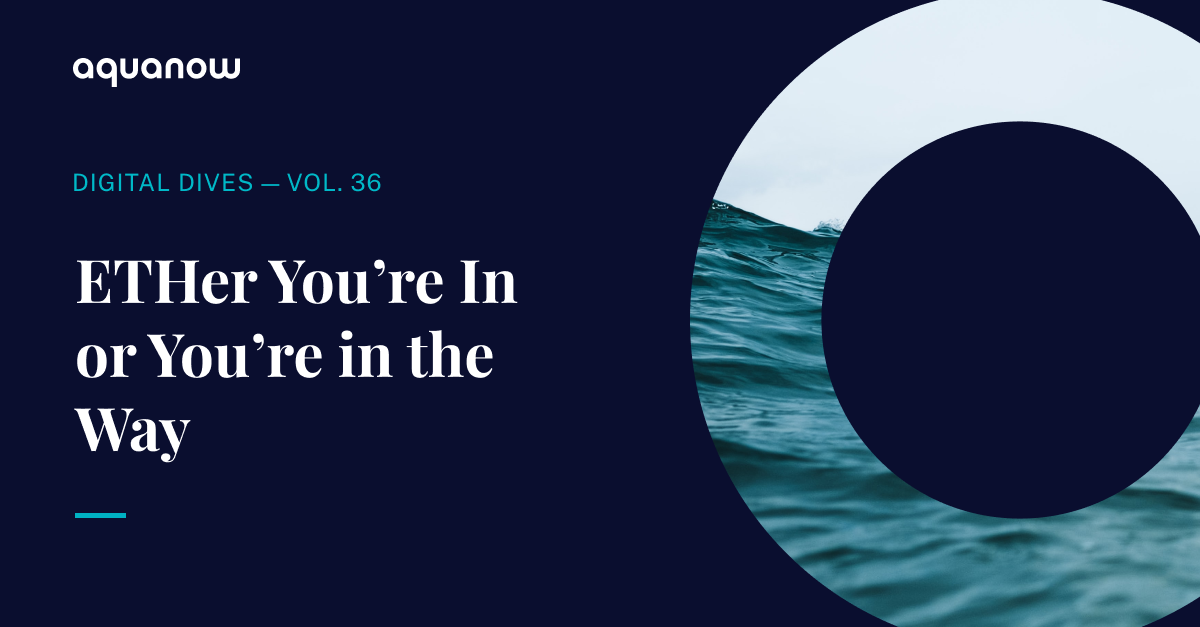 Aquanow Digital Dives: ETHer You’re In or You’re in the Way — Vol. 36
< Back to News & Resources

Two weeks ago, something really cool happened. A group of developers managed to seamlessly convert the underlying consensus mechanism of a global decentralized data storage and transaction validation platform. Said otherwise, the Ethereum blockchain was transitioned from proof-of-work (PoW) to proof-of-stake (PoS). These protocols are how the network establishes trust and reliability, which is fundamental to the technology. There are about 525k daily users of Ethereum, with $31B of value locked across nearly 3,000 applications. The risk of getting something wrong was substantial, but everything went off without a hitch. What’s more, the effort wasn’t coordinated in a boardroom - it was engineered using online channels, tying together the work of brilliant coders scattered across the world. The result is a blockchain that is greener, more decentralized, has greater security, and boasts a healthier economic model. I believe this accomplishment has landed the project as the top blockchain prospect for institutional investors.

Of course, it all started as a meme. The narratives involving digital assets as a replacement to national currencies are a bit misguided in my opinion. The current system could use some reform, but I don’t think living through something like Bretton Woods III would be a lot of fun. There’s a coalition of ETH supporters who believe that the asset is on its way to becoming “ultrasound money” which has its flaws, but the underlying premise is an important element of the institutional investment thesis. The go-forward architecture of Ethereum is such that the circulating supply of its tokens could soon be in systematic decline.

Let’s take a step back in history to see how the Ethereum economy used to operate. Under PoW, miners were rewarded by the protocol for performing energy intensive calculations to ensure the validity of transactions and secure the state of the network. In addition, the miners received gas fees paid by individuals who conducted transactions. This resulted in roughly 13,000 ETH tokens being minted daily and an undesirable user experience because the cost of interacting with the network was unpredictable. The community took note of this and in August of 2021 EIP-1559 was implemented. This introduced a new framework of a standard base fee and an optional tip that users could pay to incentivize the faster processing of their operation. Importantly, the base fee gets burned, which takes those tokens out of circulation.

Now that the merge has passed, miners have been replaced by a network of validators as protectors of the blockchain. Because the design of PoS networks doesn’t involve the computational power to solve a mathematical problem, the rewards to incentivize staking are lower. This has the effect of reducing the daily issuance of ETH for block rewards to around 1,600. When a user effects a transaction, the tip flows to the validators and the base fee is still burned. As on-chain activity picks up, there’s a scenario where the amount of ETH burned is greater than the daily issuance, resulting in a decrease of the total supply. Under these circumstances and holding the value of the chain constant, it’s implied that token prices would rise. The analog in traditional finance is a share buyback, which is a feature that generally appeals to institutional capital allocators.

During a bear market, it can be tough to remember that prices can go up, but as the macro cycle changes and innovation attracts more blockchain users, it seems likely that valuations will also move higher. Another critical development in the post-merge investment thesis for ETH is that any holder can stake their assets to participate in the chain’s security and earn a yield from the block rewards and tips. The ways of earning this income vary from setting up a node to delegating through a staking service, but the additional return is highly democratized and provides an outlet for more profit. Many institutional investment mandates have income requirements and now Ethereum satisfies this constraint. Further, generating a cash flow makes traditional financial modeling of the asset possible.

A term that institutional investors have become intimately familiar with in recent years is sustainability. Often this is comingled with allocating capital to projects or companies that are making improvements as it relates to environmental, social, and governance (ESG) values. Ethereum’s transition to PoS has reduced its energy consumption by more than 99%. The community recognized that PoW at large scale had adverse ecological effects and would be a significant headwind for broader crypto adoption. The decentralized team of protocol developers collaborated to rewire the chain for long term viability, checking off the E, S, and G boxes along the way. Below are some charts to help you visualize the scale of the change:

With a market cap of $165B, Ethereum is the second most valuable digital asset. CoinMarketCap indicates that the average daily volume of ETH trading is about $20B. These figures are acceptable to portfolio managers who oversee large pools of capital and don’t want to impact price when trading. Ethereum is one of a handful of digital assets with sufficient liquidity for institutional pools of capital.

Transaction volumes, fee revenue, and total value locked are all down significantly in the current bear market, but Ethereum is still dominant in all these respects relative to other chains. As a result, the network continues to take market share when it comes to developers. Attracting talent helps facilitate transformations like the merge and paves the way for brighter days ahead.

Next up for the dev team is the Shanghai upgrade. Importantly, this may allow for the withdrawal of staked Ethereum. Currently, these tokens are locked unless committed to a liquid staking pool where there are efforts underway to provide enterprise-grade solutions, too. Regardless, the ability to unstake would remove one of the final hurdles for institutional adoption (regulation being the most important and still pending) and this could allow for innovative investment funds like a staked ETH ETF. There are several scalability improvements planned for the chain as well, which leads Messari to conclude that, “Ethereum will likely be fast and cheap enough for 99% of users in the next 12–18 months.” ETH remains a growth asset.

It's estimated that institutions invested $9.3B into the digital asset markets in 2021, up 36% from the year prior. Token prices have taken a beating as many cases of greed and poor risk management were exposed. These stories are still driving negative headlines. Meanwhile, the space continues to evolve and onboard new users. Perhaps the most significant development in digital assets this year has been Ethereum’s PoS transition, which has meaningfully enhanced its energy efficiency, while providing new sources of return in the form of yield and potential supply reductions. Taken together, I think we’ll hear a lot more about institutional investors making allocations to Ethereum. Even if, as QCP notes, it’s only as a “high beta play for investors to express their macro views.” Bank of America, Fidelity, WisdomTree and even Chipotle agree.