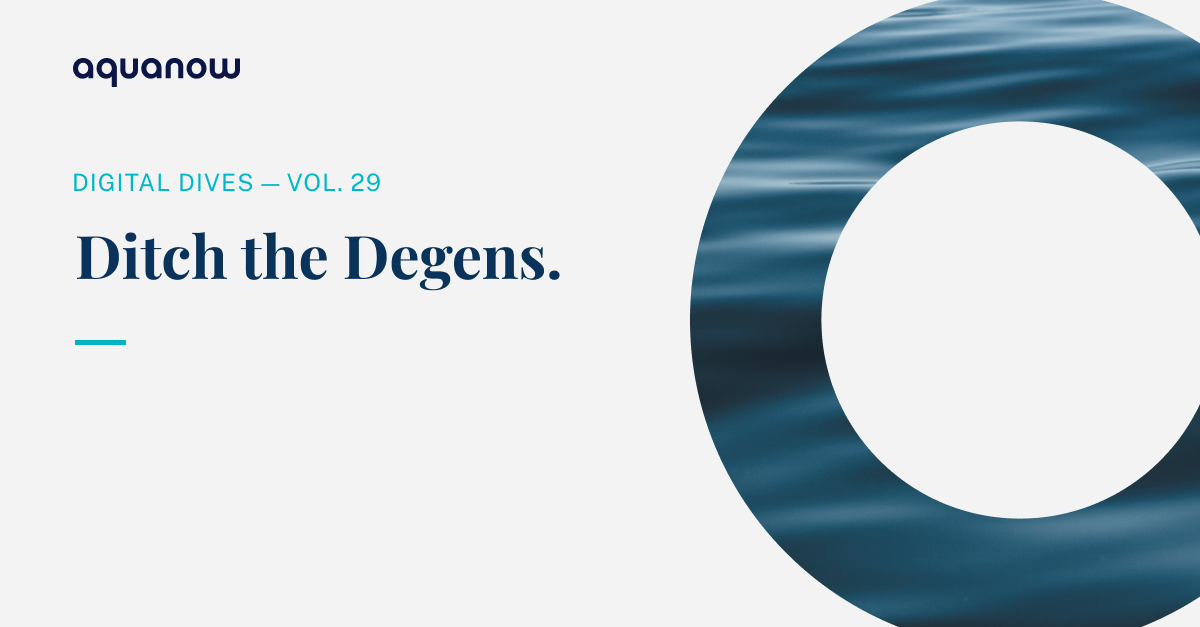 I read an interesting note the other day from Amir Bolous. He’s a relatively young computer scientist who describes himself as a “wonderer + wanderer”, which resonates with me. His exposition “What I’m frustrated by in crypto” is intentionally written from a pessimistic point of view, making it something important to consume, if you find yourself positively inclined but wanting to be prudent. Understanding that our social media apps are algorithmic echo chambers, it’s critical to seek out perspectives that can challenge our investment theses, views of the world, etc.

Amir’s piece is based around his experience asking attendees at digital asset conferences: “in the present state of crypto or blockchains, what applications do you think are solving real-world problems?” He remarks that most responses are aloof, suggesting that many in the space are merely along for the ride - participating in a scene and having a bit of fun along the way. However, underlying Amir’s frustrations is an implicit optimism. He does see potential for good in decentralized blockchains, but worries that:

The essay goes on to discuss, that while DeFi offers some interesting new ways to effect financial transactions, the tools introduce new obstacles that don’t exist in the traditional framework such as impermanent loss for market makers. Novel approaches to borrowing/lending venues are cool, but in their current form, the biggest use-case is to enable speculation, rather than provide access to services for the unbanked. He makes similar arguments against NFTs, which have the potential to evolve into something more interesting than scarce and provable ownership of JPEGs, but remain the fixation of people playing a greater fool game. I’ll leave the other critiques for the curious reader, but the point is - the longer the ecosystem continues to be about wagering that “number go up” then the more likely it is that’s all it will ever be.

It becomes a case of path dependency where events, ideas, and behaviors of the past persist out of a reluctance to change. Related to this is the biological phenomenon of “Phylogenetic inertia” which Wikipedia details to be the “limitations on the future evolutionary pathways that have been imposed by previous adaptations.” Over hundreds of millions of years, a fish can become a lizard, but it might take another couple hundred for it to get fur, and it will retain elements of its original form.

I am no student of biology, but I came across this term during a podcast with two of my favorites - Jim O’Shaughnessy and Alex Danco. The first 20 minutes of that discussion had my head spinning as the polymaths jumped from one deep topic to another. I’ve since had to replay it a couple times to let the various ideas sink in. How the pair got onto the topic of path dependency is a wild ride, but I’ll try to tie it together in the context of Amir Bolous’ concerns with the digital asset market.

In short, psychologists have described that, over the course of one’s life, childhood experiences will have profound behavioral impacts. Sigmund Freud’s work inspired the field of psychodynamic theory, which in the plainest of descriptions works off the idea that much of our demeanor is rooted in our unconscious. Our feelings, motives, and decisions are influenced by the impact of our past circumstances. (I’m very loosely paraphrasing, so feel free to respond here and correct me).

Now, let’s extend this concept to a group of people who spend a fair bit of time together. As a mass, the individuals will start to embody a set of collective motivations and experiences such that a sort of confederated brain is formed. As its neurons fire in certain patterns with increased frequency, the brain gains synaptic strength and behaving in a certain manner becomes a normal response to given impulses. We can apply this commercially by considering that the things a company feels most insecure about are probably rooted in the collective experience of its founders when launching the venture. For better or for worse, this motivates their strategy and can make change difficult in the later years.

There’s a decent amount of research about how the economic conditions prevailing during a firm’s founding can impact its course of development (here’s one about banks). It’s difficult to tease out the survivorship bias, but some of the papers I’ve read indicate that, even after adjusting for the fact that most start-ups don’t make it, there’s a greater propensity for failure when companies are launched during a recession. However, the ones that make it through become entrenched in their respective industries.

O’Shaughnessy and Danco discuss how we can extrapolate the ideas of psychodynamic theory to this finding. A firm incorporated during economic hardship might be more frugal, demonstrate better risk management, or even have a fight or flight intensity in their operations. These features become engrained within the group through participation and extended thereafter through lore. Behaviors from the founding years would be reinforced and as Ben Horowitz notes: What you do, is who you are.

Aquanow was launched during the 2018 crypto bear market. Three friends left their prominent careers in traditional finance to start a liquidity and trading platform for an asset class that was being indiscriminately disposed of and mocked as a scam. However, through superior service and lower costs, the three continued to make connections with institutions operating in the space.

The founders kept the team small and managed through their own grit. One executive didn’t sleep in a regular bed during the early years because he crafted an alarm that would wake him whenever his attention was required. We’re all happy those days are behind us, but none more than he. The product improved over time, including one iteration that was partially coded in the delivery room as a future executive was being born. The client list grew from word of mouth, despite it being extra difficult to build trust in the digital asset market. To preserve this rich culture, the team grew slowly.

Fast forward to the present and our headcount has increased to nearly 70 but the new additions continue to operate with a focus on advancing the company’s ambitions, regardless of market conditions. Aquanow hasn’t experienced any blow-ups and didn’t have to adapt its risk management framework during the present downturn because it was forged amid similar conditions. This behavior might change over time, but if we believe that there’s an element of phylogenetic inertia in business, then it’s likely engrained for a while to come.

Aquanow isn’t the only company working on web3 who can tell a similar story. The industry started with the idea of a digital asset that could be managed and transferred free of government control. It then progressed to smart contracts on a similar architecture. Next came financial applications with code as the intermediary, owned digital culture, and so on. Each cycle draws in gamblers, but following their exit, the ecosystem is left with a stronger, larger, and more diverse group of builders. Those teams operate prudently while trying to make a difference and leverage emerging technologies responsibly.

One final thought on all this. The lizard that grew hair and saw its lineage evolve across earth did so following a massive extinction-level event that wiped out most of its reptilian brethren. I don’t want to see one of these hit the digital asset markets, but it is a risk if the industry doesn’t mature away from tools for speculation. As Byron Gilliam from Blockworks remarked in his note earlier this week, we may have dodged a meteor when Jay Powell raised rates and pulled liquidity out of markets. This killed Terra/Luna and led to tens of billions in losses. However, left unchecked, Do Kwon’s community could have continued its massive expansion. Had the ensuing losses been multiples larger, then maybe the response would have been an outright crypto ban. It would have been easier to socialize such an action if a huge pool of savers were impacted. Policymakers have taken note and they’re coming with rules. Concurrently, we’re seeing a flood of entrants into the digital asset markets who are used to operating in a regulated and (generally) less speculative environment. This might curb some creative elements of the ecosystem, but do you think it makes for a more sustainable trend?