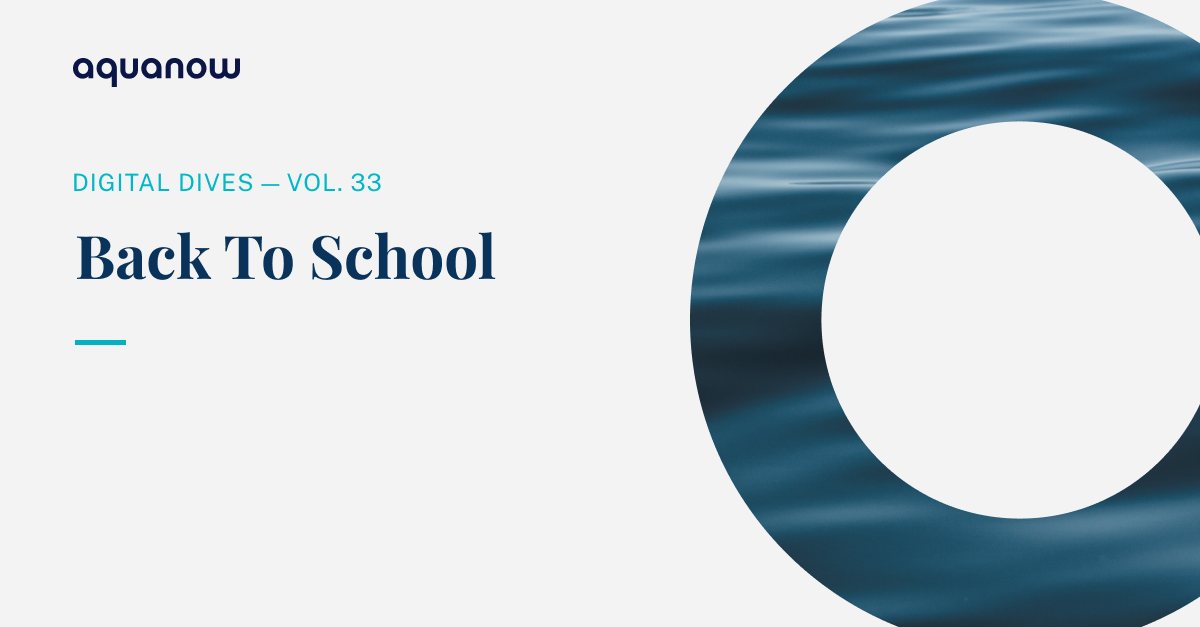 Aquanow Digital Dives: Back To School — Vol. 33
< Back to News & Resources

Last week, we introduced the idea of an exponential gap caused by hyperbolic technological advances while society’s institutions plod along in a more linear fashion. The result is a sort of tug o’ war that can create some awkwardness as technologies entrench themselves in our daily lives faster than policymakers can produce operating guidelines or swift enough to make executives at incumbent powerhouses nervous. Today, let’s look at another example of how this divergence manifests itself and some ways the web3 community is coming together to help align various perspectives.

A couple years ago, I thought my career path was set. I’d been working in finance for about a decade in various roles and thoroughly enjoyed each experience. Fortunately, my bosses encouraged me to engage in outside-the-box learning. Sometimes this involved studying the research from thought leaders beyond the organization, pursuing various valuation designations or even participating in conferences that weren’t directly aligned with my day-to-day. With the benefit of hindsight, I can see that the freedom to explore adjacent subject matter was fundamental in my decision to shift my career away from traditional finance towards digital assets.

Let me first say that I was a long-time skeptic of cryptocurrencies. Friends frequently suggested that I look at the innovation being built on blockchains, but these approaches were quickly dismissed. Eventually, I (unsuccessfully) dabbled in the ICO craze of 2017 and decided my time was better spent focusing on frontier technologies and developing themes that seemed more suitable for my clients at the time. Then DeFi summer came along and suddenly this wild world of Lambos and memes started using terminology that resonated with me, like borrowing, lending, interest rates and derivatives. Some of the bulge brackets began publishing formal research on the topics of on-chain activity measurement, decentralized exchanges, impermanent loss, etc. These analysts (which never seemed to stick around very long) spoke the same financial vernacular as me. Suddenly, this formerly bizarre world began to make more sense.

Once I understood the vocabulary of what was being built, the noise of “number go up” and ugly tribal posts regarding which chain was better faded away. My twitter account followed more sober and intellectual voices across the ecosystem. I read Chris Burniske’s Cryptoassets and Arthur Hayes’ posts. These studies transformed my perspective. Where I once only saw a chaotic mess of scams and hype, I could now appreciate that digital assets could be the bleeding edge of financial innovation (to be fair, still rife with hot air and cons). I had fallen victim to the exponential gap, but with the help of some thoughtful adherents my understanding made ground on the steeper curve. It seems many others have decided to change careers and join web3 after similar experiences.

If the thoughtful works of others provided an essential catalyst in narrowing the exponential gap for me, could education prove to be an important tool for gaining broader digital asset adoption?

After exploring the web3 landscape with more curiosity than skepticism, the sense of community struck me as a sharp contrast to the environment I was used to. In traditional capital markets, ideas and knowledge are coveted as intellectual property – they’re your edge. Therefore, each conversation or piece of bespoke research is to be treated confidentially. Meanwhile, people in digital assets routinely produce amazing work for free. It’s not to say there aren’t paywalls and such, but anecdotally there’s a lot more sharing. For example, 0xvikkk produced this repository of all things web3 that anyone can use to deepen their understanding. Many others curate similar directories of information, too. These are volunteers who want to share their experiences to help advance the community.

When it’s not hilarious and helpful, Crypto Twitter can be a nasty place, so it’s not something I’d recommend for a child who wants to learn or for anyone easily offended, but you can see some more supportive contributions below:

DAOs and corporations alike have spun up entire libraries of content to help educate users. The topics range from, general education about blockchains or NFTs, to avoiding scams and safeguarding your assets. In many instances, the activities carried out generate rewards in the form of tokens. Here’s a short list to get you started:

Teaching the population about digital assets can have the added benefit of increasing general financial literacy, something which is lacking in the developed world today. Believe it or not, you might start to see some of these topics show up in educational curriculums. I don’t mean post-secondary (that’s happening, too) but your kids or grandkids might be assigned some crypto homework in a few years if these survey results are to be taken at face value:

For the digital asset industry, getting voters up to speed is helpful but what about trying to get Wall Street and other financial institutions on board? It turns out that several groups are working hard to help bridge this gap with important tools. CoinDesk launched its Digital Asset Classification System (DACS), which provides a taxonomy of the token universe. Groups like Token Terminal provide free software for analyzing profitability metrics to help bring fundamental rigor to the investment analysis of blockchain projects. The Block, Messari and GCR deliver a mix of free and paid research analysis to help participants cut through the hype, as well. Of course, there are tools like Aquanow’s DeFi Funding Index and Rate which can help institutional investors decompose the sources of risk and return in their portfolios. Further, Treehouse Finance has a wallet aggregator to facilitate harvesting risk premia across DeFi. Interested executives can also sign up for free derivatives intelligence from Genesis Volatility or Deribit.

The digital asset industry has ramped up its lobbying efforts over the past year and if you compare some of the earliest congressional testimonies from the industry to the most recent, you notice the difference in tone and line of questioning from the elected officials. This has come on the back of efforts from groups like the Canadian Web3 Council (of which Aquanow is a proud member), the Digital Asset Advocacy Group, the Blockchain Association, the Association for Digital Asset Markets, and more. There is considerable capital and advocacy coming from for-profit entities like a16z and FTX’s Sam Bankman-Fried, as well.

Despite the active communication from the groups above and a bustling community of enthusiasts wanting to educate the masses, the web3 ecosystem continues to face an uphill climb. However, we can’t let up in our efforts to create awareness for the useful aspects of blockchains or the groups of creatives and innovators building on them. Relentless engagement is a necessary ingredient to mass adoption of digital assets, and it will keep the community aligned while the devs build out better user experiences. Let’s teach incumbent institutions and narrow the exponential gap together.